The Sahara Desert is one of the world’s largest deserts located in the African hemisphere of the globe. The Sahara, which is Arabic for Desert, is between the Mediterranean from the North and the Red Sea from the East.

Although the Sahara is a very large place, it isn’t the largest desert in the wor 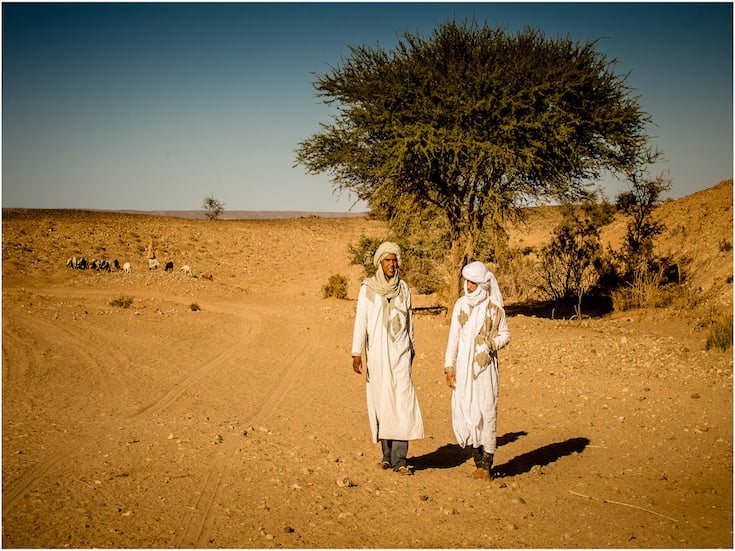 ld. The largest desert is Antarctica. However, it is still counted amongst the world’s largest desert areas and continues to grow every day. The Sahara Desert covers about 3.8 million square miles, which is 8% of the world’s surface area and includes eleven countries: Libya, Egypt, Algeria, Tunisia, Morocco, Chad, Niger, Eritrea, Mali, Mauritania, Sudan and Mali.  Even though the Sahara is spread across so many countries, only 2 million people call it home.

Many people see the Sahara Desert as a dry sandy place where not much grows, however many years ago the Sahara Desert was a fertile farmland with many people living there. Even though today, it is much drier, there are still several areas of oasis land which is fertile and productive.

How did Sahara get its name?

The Sahara desert was named by the Arab conquerors of North Africa in the 7th century AD. They called it al-sahara, meaning “the desert”.

How thick is the sand in the Sahara?

The Sahara desert is also home to a number of large sand dunes, known as ergs. The tallest erg in the Sahara is called Erg Chebbi, and it reaches a height of 150 metres (490 feet).

Was the Sahara once green?

It’s difficult to know for certain whether or not the Sahara was once green, but some research suggests that it may have been. The Sahara desert is located in the tropics, which means that it experiences summer weather year-round. However, the Sahara is also quite large, and its climate can vary significantly from one region to another.

In the northern Sahara, temperatures can reach up to 50 degrees Celsius (122 degrees Fahrenheit) during the summer months. This extreme heat makes it virtually impossible for any plants or trees to grow. However, in the southern Sahara, winter temperatures can sometimes drop below freezing point. So it’s certainly possible that there were once green areas within the Sahara desert.

How old is Sahara?

The Sahara desert is estimated to be about 4.6 million years old. It was formed from the merger of two older deserts, the Gaetulian and the Libya Deserts.

The Sahara desert occupies a large area in northern Africa, spanning over 3 million square miles. It is one of the world’s largest and hottest deserts, with average temperatures reaching over 100 degrees Fahrenheit. The desert is also home to some of the most extreme weather conditions, including dust storms, sandstorms, and flash floods.

What are 5 interesting facts about the Sahara desert?