Morocco is officially called the Kingdom of Morocco.  It is a beautiful country situated between Algeria and the Atlantic Ocean. The vast land of the Sahara Desert runs through it and there are many fascinating facts about Morocco 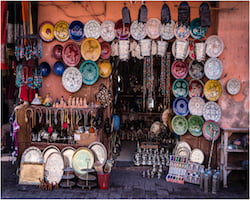 that people don’t know about this stunning country.

Morocco is filled with cities and towns as well as deserts and mountains and is home to about 32 million people, yet it is actually the same size as the state of California in America. The capital city of Morocco is Rabat, although Casablanca is the largest city in the country and homes around 4 million people. There are many other towns and cities in Morocco such as Marrakech, Tangier, Tetouan, Fes, Agadir, Meknes, Oujda, Kenitra and Nador. Some of these cities, such as Marrakech take a modern approach to life, whereas the further you go into rural areas you will find a more traditional approach.

Ethnically Moroccans are mostly of Berber and Arabic decent. Berber people have been living in North Africa for centuries, and known for living in the mountainous and desert areas.  However, more recently have been moving to the cities for work.

In Morocco the languages usually spoken are Berber, French and Arabic. The individual group of Moroccan Arabic languages are jointly called Darija. Spanish and English are also spoken in Morocco, however not as much.

Morocco is a mountainous country, most popular being the Atlas Mountains running from the Northeast to the Southwest through the centre and the Rif Mountains located in the North of the country.

Morocco has many famous foods. One of its most famous dishes is couscous. Other popular dishes include pastilla, tajine, and harira. Chicken is the most commonly eaten meat, however pork lamb and other meats are also eaten too.

This is a colourful, vibrant and stunning country which is only a short flight from the UK.

Contact Moroccan Journeys for more information about Morocco and our rich and varied Morocco Tours & Holidays.