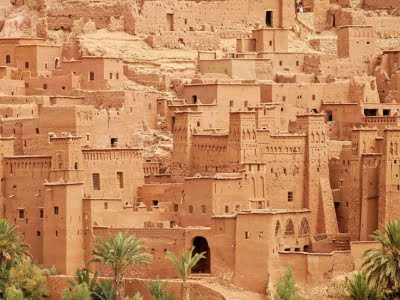 One of the most fascinating and impressive places we stop on the way to the desert on our 4×4 Morocco Tours is Ait Ben Haddou.  You can stop for a visit or this is a great place to stay overnight at one of our carefully selected boutique French-Moroccan hotels with a pool and excellent service.  Alternatively, the luxury hotel Ksar Ighnda is a larger place with a grand garden and a lovely pool which is perfect for families.

Ait Ben Haddou is a historic ighrem or ksar along the former caravan route between the Sahara and Marrakech in present-day Morocco. It is considered a great example of Moroccan earthen clay architecture and has been a UNESCO World Heritage Site since 1987.  It was also the setting for part of the film, Gladiator.

The Ksar is a group of earthen buildings surrounded by high walls and is a traditional pre-Saharan habitat. The houses crowd together within the defensive walls, which are reinforced by corner towers. Ait-Ben-Haddou, in Ouarzazate province, is a striking example of the architecture of southern Morocco.

Located in the foothills on the southern slopes of the High Atlas in the Province of Ouarzazate, the site of Ait-Ben-Haddou is the most famous ksar in the Ounila Valley. The ksar is a mainly collective grouping of dwellings. Inside the defensive walls which are reinforced by angle towers and pierced with a baffle gate, houses crowd together – some modest, others resembling small urban castles with their high angle towers and upper sections decorated with motifs in clay brick – but there are also buildings and community areas. It is an extraordinary ensemble of buildings offering a complete panorama of pre-Saharan earthen construction techniques. The oldest constructions do not appear to be earlier than the 17th century, although their structure and technique were propagated from a very early period in the valleys of southern Morocco. The site was also one of the many trading posts on the commercial route linking ancient Sudan to Marrakesh by the Dra Valley and the Tizi-n’Telouet Pass. Architecturally, the living quarters form a compact grouping, closed and suspended. The community areas of the ksar include a mosque, a public square, grain threshing areas outside the ramparts, a fortification and a loft at the top of the village, an caravanserai, two cemeteries (Muslim and Jewish) and the Sanctuary of the Saint Sidi Ali or Amer. The Ksar of Ait- Ben-Haddou is a perfect synthesis of earthen architecture of the pre-Saharan regions of Morocco.

While spending the day here, you can take a horse trek from Ait Ben Haddou on the stallions which have been trained for the Atlas Film Studios in Ouarzazate.  This is also worth a visit on the way down to the Sahara, where films such as Gladiator, Lawrence of Arabia and The Sheltering Sky were filmed.