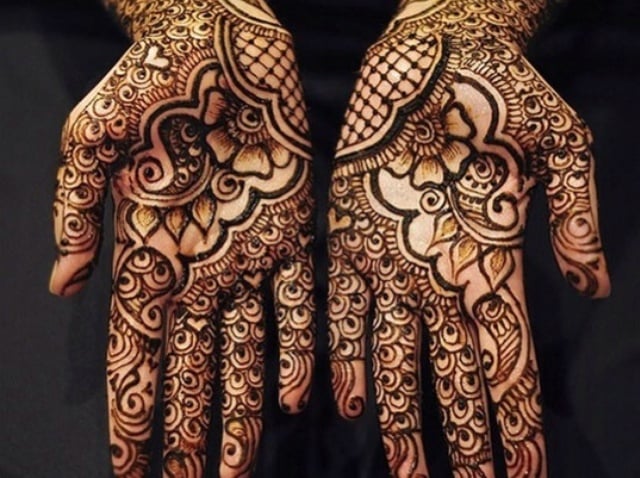 On our Luxury Sahara Tours to Nubia Desert Camp, we are mindful of taking you to the most interesting and real cultural destinations to meet the nomadic people who still live in the Sahara today.  We like to share with you many of the traditions of Morocco and one of these is the fascinating Art of Henna.

Henna was originally used to cool the hands and feet of those living in the stifling heat of the desert. However, for thousands of years, the natural staining qualities of the henna plant have also been used to create intricate body art. Henna designs date back to the Ancient Egyptians, when mummified bodies were adorned with elaborate patterns and Cleopatra wore it to decorate her skin.

The leaves of the henna plant (Lawsonia inermis, native to Africa, northern Australia, and southern Asia) are dried and powdered to form a paste which naturally causes a stain on the skin in the pattern of its application. Henna is also used as a natural dye for hair, fingernails, fabrics such as leather, silk, and wool, horses manes, and animal fur. The staining occurs when the pigment lawsone, found in the henna leaves, combines with the protein keratin, that forms the structure of our hair and skin.

The ceremonial art form of Mehndi originated in Ancient India, a tradition where Hindu brides are extensively decorated with henna patterns prior to their wedding. The natural cooling properties of henna are also thought to help relax the bride. Traditionally it is said that while the henna stain remains on the bride’s skin, she is excused from doing any housework, as well as the darker the henna stain, the better the marriage.

Now, the beautiful swirling henna designs are easily recognisable as a popular and worldwide form of self expression. Indian cinema and the entertainment industry introduced Henna to the West, and Mehndi designs, named “henna tattoos” by Westerners, became fashionable in the late 1990s.